As The Guardian Australia announced this week that Australia has quietly put 49 species on the endangered list, the business as usual way of human life hardly seems like an appropriate response.

As the biological others we share this planet with continue to cede space for us, these spaces become uncontested, colonised, human-centred and controlled spaces and places. 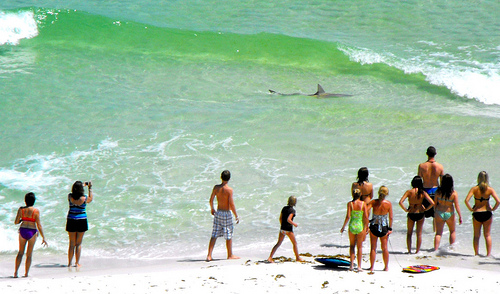 This shark has unfortunately found itself in a contested space.

This is often the result for sharks who find themselves in the contested zone.

This is an uncontested space. It is human-controlled and centred.

Sharks seemingly cannot win as we continue to cede nothing. Their options are lethal nets, hooks, guns or tonic immobility. The absence of any form of human kindness in these contested and uncontested spaces is troubling. Only by actively engaging in kindness and entangled empathy can we hope to save sharks from extinction.

Affective Habitus, Oceans: Elspeth Probyn and Linda Williams from the  History of Emotions

I just watched this lecture and I was deeply moved by a question at the end by an Italian marine biologist named Monika (sp?) on how the fish she had been studying for 3 months knew when she was coming to kill them; they did not appear as they usually did and instead hid away. This affected her so deeply with a sense of awe that she changed her study to plant life because she could no longer kill the fish.

This issue of awe was mentioned in this lecture in terms of the Oceanic Feeling referring to the term coined by Romain Rolland which relates to the psychological feeling of religion, the “oceanic” feeling of limitlessness”.

This idea of immensity, unknowingness and limitlessness has often been used to describe the ocean but Monika’s comment shows that it is immensely knowable on a smaller and individual scale. Yes, there are many creatures we have not met yet and many more we still know so very little about – but its inhabitants are ‘knowable’. They are subjects of a life, they make choices (as Monika’s did by staying away when she came to say goodbye to them) and decisions, they have opinions and they can be known.

Many people around the world interact with individual wild-living marine creatures on a daily basis. I had regular interactions with a hump-headed wrasse at the cod hole on the Great Barrier Reef in 1993. For the weeks I worked there, the same fish would wait under the boat for me each time we arrived at the dive site until I came under to swim and interact with it. At the end I started bringing him prawns to eat. This is what the true oceanic feeling is, it is one of awe, not an awe of the limitlessness but an awe of the knowledge of these sentient creatures being aware of us and showing us their awareness while the finite limitations of their future existence hangs unknown due to the anthropogenic effects on marine life. The awe comes from the fact that these fish may cease to exist within our lifetime – that they are being fished out now – not in some limitless stretch of infinity.

This awe does not separate us in the Judeo/Christian view of a human/nature division but rather unites us in the sense of Clare Palmer’s Entangled Empathy and Haraway’s become together – it is a reunion.

This is the oceanic feeling we can all benefit from. The entangled, more than human world of fish and people is the space where positive, constructive and future moving discourse can take place. Much as I agree with Elspeth Probyn in much of this lecture, I do believe that for affluent people like us around the world ‘thinking with our forks’ and saying no to fish is at the moment the most responsible thing to do, especially in light of the crisis in our oceans – it is the only way to buy time now in this realm of hyper-sped up time as Tsing points out.

Also, it is very easy to say no to eating fish once you have experienced the awe of the oceanic feeling as Monika and I and countless others have. Encouraging people to know fish and the marine worlds we sometimes share with them is an important part of this discourse – when people swim with tuna the animal instead of just opening a tin of tuna the food, things shift.

Awe, Guilt and Shame are all powerful emotions; they can all be backward looking and forward shaping. They are emotions that are key motivators to action and inaction and this is a space that requires us to sit and dwell on our actions and inactions within the more than human ocean worlds.