Two Great White Sharks have been killed in the nets off Bondi Beach this week. Two shark individuals of a vulnerable and thereby protected species have been taken out of the system their 450,000,000-year evolution has helped to create.
Is this really where Australia wants to find itself at the end of 2014? Yes, steps have been made to improve our policy toward sharks in Western Australia in regards to the government finally stopping the obvious shark cull, but the country, as a whole needs an educational and cultural shift in regards to its attitudes towards sharks.

Shark nets are a literal line in the sand of our human / nature dualism. They are supposing that we are not part of nature and that we should be protected from nature. Well, we are nature. Every little bit of us can nourish something else. To prevent this from happening by killing hundreds of sharks is nothing short of narcissistic genocide. Val Plumwood’s argument for Ecological Animalism is a fine one in my book. When I share the ocean with a shark and we both swim away intact, I feel a strong sense of gratitude and respect. Both the shark and I have the ability to kill and eat each other but we both make a choice not to.

I accept that the shark can eat me. I am not enraged at this fact; I am humbled by it. We share the food chain of the system we live in on this planet. Our bodies, human and shark, are potential food. The shark’s body is no less important than my human body. It is a collection of organs and skin and flesh which when broken down, provide nutrients to other living creatures. And yet despite this simple fact of biology, the human side of this dualism continually upholds a superiority stance that elicits emotions such as rage, spite and revenge

We the public, do not want government help to protect us from sharks and nor should we expect it. The ocean is a wild place. It needs to be accepted as such when we enter the water. Why would I hold a government accountable for my death in the ocean? Why would I hold a shark responsible for my death in the ocean? It is my choice to be there and as such, the only living thing responsible for myself is myself. I accept that I am food for others and others are food for me.

The difference here lies in intent and execution. If I willingly buy prawns knowing that the by-catch death of other creatures far exceeds the actual death of the few prawns I will eat, then I am negating the importance of the lives of the other creatures who have died along with the prawns. If I ask myself the question: I can do this but should I? And then answer, yes, and buy the prawns, I am consciously choosing to negate the importance of the lives of the by-catch creatures, the prawns and the other creatures reliant on this system to supplant my wishes above their existence.

If we willingly put up nets as barriers which we know will kill the sharks and any other marine creatures unfortunate to be caught in them, if we answer yes to the question I can do this but should I?, then we are negating the importance of all creatures, including vulnerable and threatened species, who live in the oceans to support our desire to take up temporary residence in the form of a swim.

We need to ask the questions first to level the playing field and play fair. 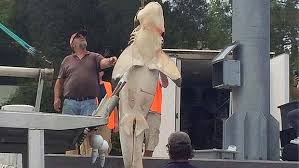