In our composting group, hedgehog, galah and I recently read this paper. We did it with reservations, trepidation and palpitations. It was very far out of our comfort zone that is exactly what we needed.

I commend her for writing this paper because it brings up the things that are uncomfortable. This is a dangerous paper. It is a terrifying paper in that it can allow us off the hook and enable us to feel ok about what we are doing to our world. Regardless of what we do to it, the planet is going to die at some point like every other living thing that has or will ever live. We often forget this fact that our planetary destiny is to collide with the sun, or have a meteor collide with us or to spin off away from the sun…death is due all life but it doesn’t mean we need to encourage or hasten its occurrence. We shouldn’t be shouting at the suicidal jumper to meet us on the pavement 20 floors down.

This paper is a brave new way to look at doom but it may just be what late capitalist forces are waiting for, a free pass to not only continue business as usual but to accelerate it and operate without the need for restraint or forward thought.

Homo sapiens sapiens are a geological force enacting change. Buck talks of us as “a collectively bland actant” which perhaps not accidently brings up the ideas of the banality of evil (Arendt, 1963) but Buck is talking about it as a binary opposite to graphic stories of destruction like say, Chernobyl or what is happening to the Great Barrier Reef. The slow, usual destruction we no longer see such as agriculture and electricity and housing, the necessities of our modern lives are still forms of destruction – albeit, not the type that shouts from front pages and sells papers, but destruction. Whether we are destroying in immediate graphic technicolour sound-bytes or slow grinding almost invisible mechanisms, we are still destroying and it is difficult for many of us to find any enchantment in it.

This type of discourse bristles and chafes against our sensibilities – it is uncomfortable, difficult and haunting and the very reason for this is that it may be inevitable. This type of discourse may enable corporations like Shell and BP to sponsor the tracking of the last whales and sharks and quolls and the museum-ification of whatever happens to remain.   It can be clearly seen, “The Last Ones: This zoo enclosure is fuelled by solar energy proudly provided by Shell and BP.”

I want to believe what she is saying, that this re-enchantment is possible, because life would be easier, we could be happier and less worried and we could accept destruction and death as a natural and inevitable part of anthropocenic life.   Hard as I have tried, I can’t buy it. The acceptance of living with anthropocenic loss is not a bridge I am willing or able to cross, not just yet at least. I don’t want to encourage the jumper to jump, I don’t want to be silent about Abbott Point coal mine, I don’t want undersea oil exploration to continue…This feels eerily close to Banksy’s Dismaland theme park, but it feels like a genuine option in this paper instead of a scathing comment on business as usual as it is for Banksy.  When I am willing to accept these things I will buy my ticket to see the Last Ones exhibit and like a princess in a child’s story, I will let myself be enchanted. 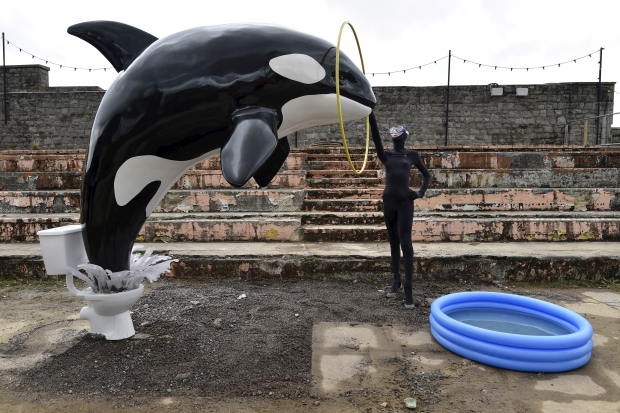 On the Possibilities of a Charming Anthropocene